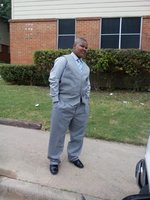 Matthew Trakel Paul was born in Dallas, Tx. July 18, 2001, to the young parents, Dominic J. Paul and Chrisavia Shears.They loved him to life! He was a joy to our world! He learned so fast and was far beyond his years. He excelled in school. He was the smartest child i had ever seen. He read at a college level in the 6th grade! He was passionately involved with the band at Albert Sidney Johnston Elementary School and Oliver Wendell Holmes Middle School where he played the tuba, drums and several other instruments. He sang his heart out at Holmes and anywhere else the opportunity presented itself. He was a lifelong member of St. Paul UMC,where he met our Heavenly Father. There he was a preacher in the pulpit and a proud member of our youth group. Matthew did his first sermon at the age of 12. He sang to us and could say a speech with such eloquence! I was so amazed and edified by his many talents.  He went on to Booker T. Washington High School and Windsor Forest H.S. in Savannah, GA. He desired to be a super hero. Those surviving I'm sure would say he saved their lives in some shape or form! He definitely saved mine. Matthew went home to glory Dec. 19, 2020. Matthew was the oldest of four and leaves three siblings Izabella Paul(11), Mattisyn Shears(6) and Matthias Loveless(3).  He also leaves behind tons of family and friends who supported him along his journey.