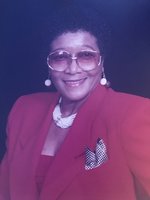 On Monday, December 21,2020 the friendly and fun loving spirit of Loraine Wilson crossed the gulf that separates time and eternity to the heavens to meet her Heavenly Father. Loraine was born to the late Will and Rosie Sanders in Harrison County. She attended public schools in Longview, Texas along with her 3 brothers and 5 sisters.  After graduating high school, she enrolled in Nelson’s Beauty College and developed skills to enhance the beauty of her clients.  Shortly afterwards she fell in love with Flonzell Townsie and the two welcomed a beautiful baby girl, Lois Daniels in 1941. A few years later he was called to service and later passed away in Rhode Island.  Loraine continued to work hard at Nelson’s Beauty College and provide for her daughter.  She later met Mark Wilson and he asked for her hand in marriage in 1961 and they remained married for the next 44 years.  During this time she became a nanny and helped families raise their children to become productive members of society.  She was also an active member and deaconess at First Baptist Church of Hamilton Park. She and her husband were proud homeowners in the historical Hamilton Park Neighborhood for over 40 years. Loraine will be joined her precious daughter Lois Jean, granddaughter Trena Marie and loving husband Mark along with her parents and 8 siblings.  Left to cherish her memories are her granddaughters Karen, Lisa, and Tiffany; great-grandchildren Sirita, Nathan, Tina, Lorenzo,Ashley, Trinity & Gabrielle; and great-great grandchildren Kalia, Julian, Nathan Jr., Tristan, Sophia, Noah, and Allison