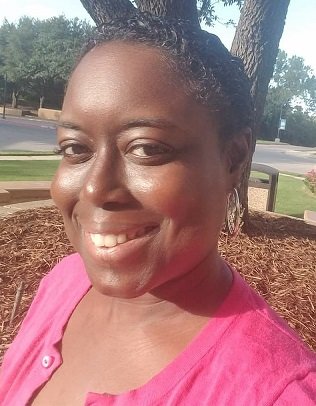 LaShanda was born on August 1, 1974, in San Antonio, Texas to Geraldine Wilson
Ladson and Alfred Ladson Jr. She was the oldest of the couple’s four children.
LaShanda accepted Christ at an early age while attending Emmanuel A.M.E Church in
San Antonio where her parents and younger siblings were all active members.
As a child, LaShanda cherished her role as the eldest and could be seen and heard often
assuring the well being of all her siblings. She was nurturing, creative, and a natural-born
leader. Each holiday, she took pride in writing and directing her siblings and cousins in
theatrical performances for the family.
LaShanda attended schools within the Northside Independent School District in San
Antonio. At Clark High School she was an active member of the choir, dance team, and
an esteemed and recognized track elitist. Before graduating from high school, she had the
opportunity to spend two weeks visiting various countries in Europe with the
photography club. LaShanda’s love for photography later led her to represent the
NAACP San Antonio Youth Division in their national competition for two concurrent
years where she was awarded an honorable mention.
LaShanda attended Knox College in Galesburg, Ill., graduating with a Bachelor of
Science, with a concentration in biology. After returning to Texas, she earned a
certification within the educational field and worked as an educator for 21 years. Her
career led her to enhance the lives of students at Dallas and DeSoto ISD, Life Schools, as
well as at ITT Technical Institute.
As an avid pursuer and giver of knowledge, LaShanda earned two masters degrees which
included a dual Master of Science in chemistry and biology from the University of
Texas-Arlington and a Master of Educational Administration from Prairie View A&M
University.
In 2003 she met the love of her life, soulmate, helper, and husband, William Barree. They
married in 2005 and were blessed with three devoted sons: Jeremiah (JB), Caleb, and
Jadon. LaShanda poured her heart into those she loved. Porschae, Destinee, and Essence
hold a special place in her heart as ‘daughter-nieces’, whom she helped to raise for three
years. To her sons, she was a protector and provider. She was their super-mom. They
were her super-babies.
Lashanda served in all the churches where she was a member. At various times of her life
she attended and was a member of R.E.A.L. Baptist Church, Celestial Haven Baptist
Church, and Kirkwood Temple C.M.E. where she was spiritually fed and nurtured and
developed wonderful friendships.
She was preceded in death by her maternal and paternal grandparents, Alfred Ladson, Sr.,
and Willie Mae Ladson; and her devoted mother, Geraldine Wilson Ladson; She leaves to
cherish a lifetime of wonderful memories, husband, William Barree; children, Jeremiah,
Caleb, Jadon, Alexus and Caellyn; father, Alfred Ladson Jr.; two sisters, Tinesha and
Shante Ladson, both of Dallas; brothers, Alfred Ladson III (Tiffany) and Jeremiah
McCain of San Antonio; aunts, uncle and a host of nieces, nephews, cousins, and devoted
friends.

To send flowers to the family or plant a tree in memory of Lashanda Ladson - Barree, please visit Tribute Store
Friday
25
September

Share Your Memory of
Lashanda
Upload Your Memory View All Memories
Be the first to upload a memory!
Share A Memory
Send Flowers