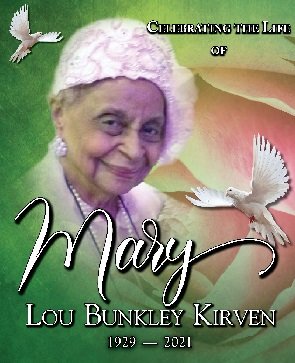 In keeping with the state and local guidelines for COVID-19, it will be immediate family only in attendance. Livestreaming for the funeral service will be provided for friends and the community at www.blackandclark.com. To access the livestream, click on Mary Kirven’s picture.

Mary Lou Bunkley Kirven, a long-time resident of Dallas, Texas, passed away peacefully on January 13, 2021, at the age of 91. Mary was born in Denison, TX to the parents of Crawford Benard “C.B.” and Ruth Bunkley.

At the age of 16, Mary graduated from Terrell High School. Mary’s education continued at Wayne State University in Detroit, Michigan, Wiley College, Marshall, Texas, and in 1950, graduated from Howard University, Washington, D.C., where she earned a bachelor’s degree in History and Education. Other higher education includes attending Teachers College, Columbia University, Austin College, and Prairie View A&M University, where she received her master’s degree. Throughout her 32 years in education, she was a classroom teacher, curriculum writer, and reading specialist. She worked at all levels, including elementary and Law Magnet School of Dallas. Most notable, Mary worked at the original Brandenburg Elementary School in Irving ISD, where she was the first African American to integrate the school. Her work broke barriers and provided the path for future African American educators. Mary’s community involvement included membership in Alpha Kappa Alpha Sorority, Incorporated®, Alpha Xi Omega Chapter, where she was a life member for over 65 years. One of Mary’s greatest memories as a member of Alpha Kappa Alpha Sorority, Incorporated®, was being recognized in 2012 at the 65th Boule in San Francisco, California, for her work with Civil Rights in the 1950’s and 1960’s. Her involvement with integrating local department stores was groundbreaking for the African American community. This was done in conjunction with the American Friends Service Committee of Pennsylvania, as department stores were not hiring African Americans, even with a college degree.

Mary had many talents, but she mostly enjoyed playing bridge. She was a member of the Diamond Bridge Club for over 50 years and frequently played with other bridge groups. She was a master at duplicate bridge along with her lifelong bridge partners. Other community involvement included Jack & Jill of America, Incorporated®, Dallas Chapter, Dallas YWCA, and Good Street Baptist Church. In her earlier years, she was also a member of her local Howard University Alumni Chapter. She was proud of the education she received from Howard University and had fond memories of her time as a student in Washington, D.C.

Gifts in lieu of flowers, may be made in memory of Mrs. Mary Lou Bunkley Kirven, to the Howard University College of Education Scholarship Fund. By mail: checks made payable to “Howard University” and send to Howard University, P.O. Box 417853, Boston, M.A. 02241-7853. Online: credit card donations can be made at https://giving.howard.edu/givenow. Please indicate the option that notes that your gift is made in memory of Mary Lou Bunkley Kirven and designate other for College of Education Scholarships.

To send flowers to the family or plant a tree in memory of Mary Bunkley Kirven, please visit Tribute Store
Thursday
21
January