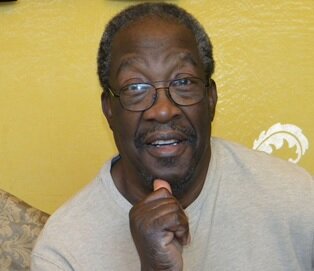 Deacon General David MacArthur Thomas was born in September of 1942 in Fairfield, Tx. He was the third of ten children born to Mary Elizabeth Lewis and Julius Thomas. He was preceded in death Mike Anthony Thomas, Willie Jay Thomas, Margaret Thomas, Ida Pearl Thomas, and Julius Homer Thomas. In Fairfield, Tx he attended and graduated from Dogan High School. In 1966, he married the love of his life and comedic partner, Judy C. Brown Thomas. From that union, were born David L. Thomas and Deitra L. Thomas Wright. He is also survived by his beloved grandchildren, Judy J. Thomas, Kianna J. Wright, and Kaleb J. Rachal.

In honor of a man who served his country as a Combat Medic, to ensure the injured survived. My dad trained many soldiers as a Specialist Seven during the time when black men were not allowed to be equal to or out rank the white men in the United States Army.

My sister and I hold our heads high, because Daddy continued to serve at the VA Hospital as a CNA and then a phlebotomist. Dad didn't stop there. Dad also was instrumental in the training of the Friendship-West Baptist Church ushers in the early 80's.

Shortly thereafter served as church Deacon under the late Rev. Robert L.Castle and current Pastor Fredrick D. Haynes. Our dad led Wednesday Church bible study along with the other phenomenal loyal Deacons of Friendship West. When the Church and Rev. Haynes was under attack, our Daddy never wavered.

From Polk St to Kiest Ave to Wheatland Rd the FWBC family moved, Dad never stopped serving God and His Church. Dad did his best as he fought the affects of Agent Orange, a deteriorating injured back received carrying soldiers in Vietnam and PTSD. Deitra, Judy Juanita, Kianna, Kaleb and myself will do our best to honor such an upstanding character of a man who has given so much of himself for us and others.  He is survived and cherished by his sisters (Rosie and Fuzzy), brothers (Sam and John), nieces, nephews, friends, and church family (FWBC) for the abundance of laughs and relationships he built with each and everyone.

To send flowers to the family or plant a tree in memory of General Thomas, please visit Tribute Store
Thursday
9
December

Share Your Memory of
General
Upload Your Memory View All Memories
Be the first to upload a memory!
Share A Memory
Send Flowers