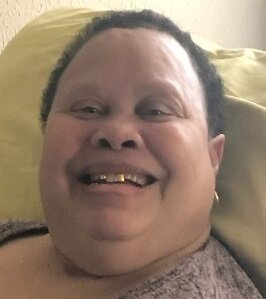 Barbara Elaine Williams-Herron, lovingly and affectionally called “BEAN” was born August 24, 1950, in Dallas, Texas. She was the second of seven children to the parentage of Billie Faye Shumaker Williams and Rufus Williams, Jr.

Barbara received her formal childhood education in the Dallas Independent School District.  She was a 1968 graduate and a cheerleader of Booker T. Washington High School.  Barbara also played softball in her early adult years.

Barbara’s bright eyes and infectious smile could add sunshine to any atmosphere. She was a vibrant, warm-hearted woman who had a such a sweet and loving spirit. She impacted many lives, especially those who were close to her.

Barbara passed away January 14, 2022 surrounded by her loved ones and friends. Those who preceded in death are: her parents, Billie Faye Shumaker Williams and Rufus Williams, Jr.; her brothers, Ronald D. Broadus and David Williams; her sister, Donna Vassel; and her maternal grandparents, Willie B. Booker and James Wesley Shumaker.

To send flowers to the family or plant a tree in memory of Barbara Herron, please visit Tribute Store
Friday
21
January

Share Your Memory of
Barbara
Upload Your Memory View All Memories
Be the first to upload a memory!
Share A Memory
Send Flowers
Plant a Tree