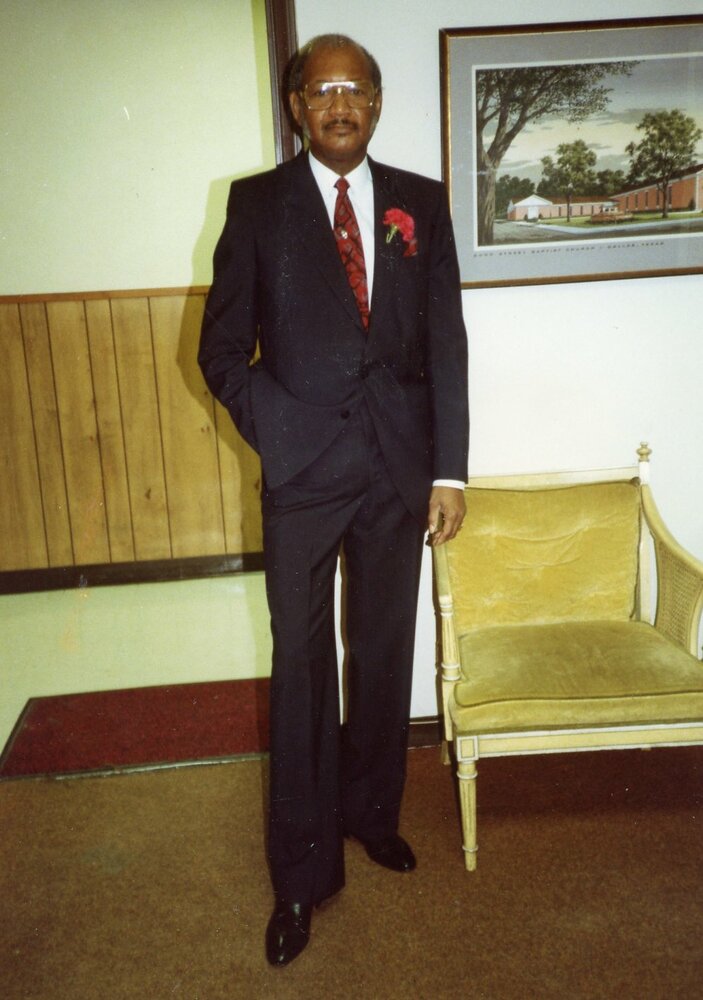 Ava Charles Jackson was born to Ernest Jackson and Gladys Perkins on June 6, 1932, in Kerens, Texas.  Alva accepted Jesus Christ as his personal savior at an early age. He attended Kerens Public Schools and entered the United States Air force July 25, 1947, at the age of 15.  After leaving the military July 25, 1950, he moved to Dallas where he met and married Elinor Sedberry on July 25, 1952. Alva and Elinor were married for 61 years until her untimely passing in 2012.   They were the first couple to be married at 902 North Good Street by Pastor Clark.  Alva united with Good Street Baptist Church on December 28, 1952, under the leadership of Reverend C. A. W. Clark Sr.  He and Elinor had one son Alva Charles Jackson, Jr. affectionately known as Little Alva.

Alva loved his church and was a faithful member.  He was a Deacon and served for over 50 years on the Deacon Board.  On November 22, 1957, the Good Street Federal Credit Union was established and received their charter. Deacon Alva Jackson was a charter member and the First Vice President of the Credit Union.  Alva was a member of the Credit Union Board of Directors until 2016.  He was also Facility Manager for the church for many years.

Alva was employed by the Dallas Independent School District for over fifty years and was the first black to be hired as a Supervisor for DISD.  He received numerous awards for his professionalism and dedication to the facilities department.  Alva was an outstanding supervisor who assisted many individuals in seeking employment with the school district.  Even after retirement he continued to work free of charge for the school district.

Alva was a member of the Dallas South Lions Club where he served as Treasurer for many years.

To send flowers to the family or plant a tree in memory of Alva Jackson, please visit Tribute Store
Tuesday
12
April

Share Your Memory of
Alva
Upload Your Memory View All Memories
Be the first to upload a memory!
Share A Memory
Send Flowers
Plant a Tree