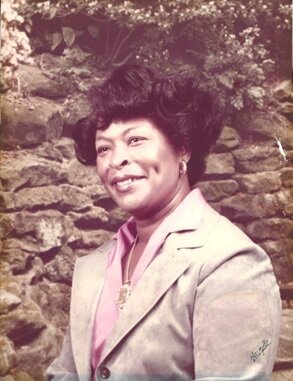 Obituary of Mary B Smith

Mary Bendetta Brooks Smith was granted permission by God to come home to be with Him on June 22, 2022, at the age of 91.

Mary was born January 14, 1931, in Kossee, Texas, the seventh child born to Sherman Brooks and Bernice Harper Brooks. She was affectionately known as “Sweet” to family and friends. She received her formal education in Mexia, Texas, attending Dunbar High School.

As a young lady, she had heard about this good-looking guy that would be at “The House of Joy” and decided to go see the “talk of the town”. She arrived and laid eyes on this tall, handsome, smooth guy named Cecil.  Her personality, dimples, and good looks caught his attention, too; and they married in 1954, and remained devoted for 55 years until his death in 2007.

Upon moving to Dallas, Mary was a domestic worker for the J. Glenn Turner, Betty & Bill Calloway, Ward, and Lamar Hunt families. She shared many memories of the Hunt Family and looked forward to watching the Kansas City Chiefs games to catch a glimpse of the family. Mary enjoyed watching television – especially the award shows, football, and basketball, as well as her religious programs which she watched daily.

Mary was a fashion “Queen” who loved styling the latest fashions, and was always well-dressed and color-coordinated, with that ‘right’ piece of jewelry that provided that perfect accent. She would light up the stage with that self-assured air when gracing the runway of the many fashion shows she participated in over the years. Mary and a group of devoted friends in the “Birthday Club” would dine in the latest restaurants; attend just-released movies; and would put the ‘grand’ in the grand openings of buildings, schools, churches, centers, gardens, or stadiums.

She always had a camera available to take pictures of anything uplifting. And was thrilled when family and friends would share pictures of their outings, families, gatherings, and Holidays. She was noted for decorating her home and maintaining a well-manicured yard. Once, a young nephew asked her why she kept so many objects in the China cabinet. Her reply, “Beauty!   I want to be surrounded by beauty!” Mary also loved entertaining family and friends through gatherings at her home.

In later years, she was involved at Good Street Senior Activity Center where she enjoyed the food, fellowship, and puzzles which she continued to receive after she could no longer attend the center in person.  She enjoyed walking and socializing with the “Bowling Green Walkers”

Mary united with Greater St. John Primitive Baptist Church under the Pastoral leadership of Rev. F. L. Livingston. She served as an Usher and member of the Darcus Circle. Later she moved her membership to The Exciting St. John, under the leadership of Dr. Vincent Davis. She served faithfully until her health declined.

To send flowers to the family or plant a tree in memory of Mary Smith, please visit Tribute Store
Friday
1
July