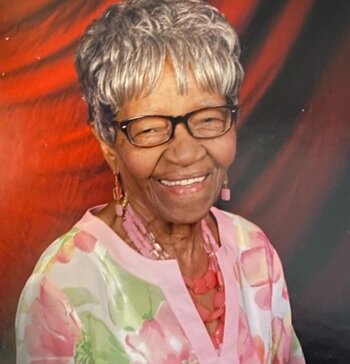 Please share a memory of Opealean to include in a keepsake book for family and friends.
View Tribute Book

Ms. Opealean Jacobs Smith was born on August 13, 1924, to the late Thomas and Ora Jones Jacobs in Longview, Texas. For many years, she worked in the retail industry as well as providing in-home childcare for infants and small children. In her spare time, she loved gardening, quilting, spending time with her family, playing spades and dressing up in fashionable clothing especially skirts and jewelry. In her late 70’s, she enrolled in El Centro College where she received her associate degree in Computer Technology in 2006. With a GPA of 3.81, she was also a member of Phi Theta Карpа - Sigma Tau Honor Society, an international organization of high-achieving college students with a 3.5 or higher GPA.

She was a loving and caring mother, grandmother and an epitome of a friend. She did not meet a stranger. She opened the door to her home to many children in the neighborhood. She was longingly known to everyone as MaDear. She was a beautiful person inside and out. Most of all she was a God-fearing, Christian woman. A few years ago, her health declined and on Monday, November 28, 2022, God sent His angels to guide her home at 6:40 am. May MaDear rest in paradise as we hold memories of her in our hearts.

To send flowers to the family or plant a tree in memory of Opealean Smith, please visit Tribute Store
Friday
2
December

Share Your Memory of
Opealean
Upload Your Memory View All Memories
Be the first to upload a memory!
Share A Memory
Send Flowers
Plant a Tree